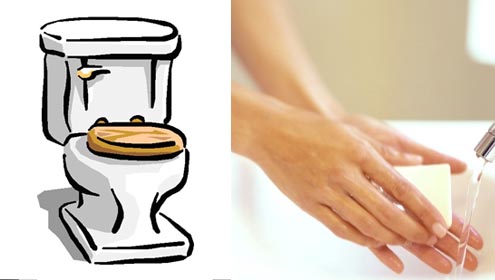 What a shitty way to die!  41 percent of humanity, yes you read that right, 41 percent, still shit in the streets because they don’t have proper sanitation, not to mention that “[t]oilet paper is an unimaginable luxury”. (4).  This lack of sanitation leads to the 2nd biggest killer of children -diarrhea.  Really.

Well, how many people in the world don’t have what you and I have, you know, “access to a private, flush toilet served by a continuous supply of piped water—with taps and toilets in close proximity”?  That’s much better than “basic” sanitation and “[f]rom a health perspective, this [kind of improved sanitation] is optimal.  Human waste is channeled by pipes into sewerage systems and treatment facitlities, ensuring that drinking water is separated from the pathogens carried in faecal material. Meanwhile, taps located in sanitation facilities enable people to maintain personal hygiene”.  The answer is that about 4 BILLION PEOPLE  do NOT have this kind of improved sanitation  (p.112 of the report), which is about two-thirds of the world!

“Deprivation in water and sanitation produces multiplier effects. The ledger includes the following costs for human development: • Some 1.8 million child deaths each year as a result of diarrhoea—4,900 deaths each day or an under-five population equivalent in size to that for London and New Yorkcombined. Together, unclean water and poor sanitation are the world’s second biggest killer of children. Deaths from diarrhoea in 2004 were some six times greater than the average annual deaths in armed conflict for the 1990s.” (p.6 of the report)

“Most deaths from diarrhea . . . are caused by shigella, or bloody diarrhoea. Unlike other forms of diarrhoea, shigella cannot be treated effectively with simple oral rehydration therapies—it requires more costly antibiotics. Even for households that can afford treatment, shigella is a growing threat because it has rapidly developed resistance to antibiotics.”  (p. 43 of report)

“Clean water and sanitation are among the most powerful preventative medicines for reducing child mortality. They are to diarrhea what immunization is to killer diseases such as measles or polio: a mechanism for reducing risk and averting death.” (p.43 of the report)

Anyone reading this webpage is too young to remember and would probably be shocked to learn that:

“Just over a hundred years ago London, New York and Paris were centres of infectious disease, with diarrhoea, dysentery and typhoid fever undermining public health. Child death rates were as high then as they are now in much of Sub-Saharan Africa. The rising wealth from industrialization boosted income, but child mortality and life expectancy barely changed.  Sweeping reforms in water and sanitation changed this picture.” (p. 5 of the report)

When are we going to force the world to institute these same sweeping reforms for the 41 percent of humanity still without access to even basic sanitation?  Why doesn’t the fact that 41 percent of humanity are still being forced to live like animals, shitting in the streets, make the front page of your newspaper and stay there until it’s no longer true?

Did you go to the bathroom today?  I mean that question literally.  If you did go to an actual bathroom, do you know that’s only by virtue of where you were lucky enough to be born?  The unlucky ones deserve our front page attention, don’t you think?