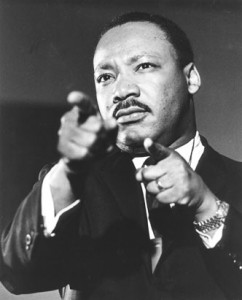 Can you take to heart the following words he spoke just four days before he was gunned down ??

“First, we are challenged to develop a world perspective. No individual can live alone, no nation can live alone, and anyone who feels that he can live alone is sleeping through a revolution. The world in which we live is geographically one. The challenge that we face today is to make it one in terms of brotherhood.

. . . Through our scientific and technological genius, we have made of this world a neighborhood and yet we have not had the ethical commitment to make of it a brotherhood. But somehow, and in some way, we have got to do this. We must all learn to live together as brothers or we will all perish together as fools. . .

We are challenged to rid our nation and the world of poverty. Like a monstrous octopus, poverty spreads its nagging, prehensile tentacles into hamlets and villages all over our world. Two-thirds of the people of the world go to bed hungry tonight. They are ill-housed; they are ill-nourished; they are shabbily clad. I’ve seen it in Latin America; I’ve seen it in Africa; I’ve seen this poverty in Asia. . .How can one avoid being depressed when he sees with his own eyes evidences of millions of people going to bed hungry at night?

As I noticed these things, something within me cried out, “Can we in America stand idly by and not be concerned?” And an answer came: “Oh no!” Because the destiny of the United States is tied up with the destiny of India and every other nation. . .Not only do we see poverty abroad, I would remind you that in our own nation there are about forty million people who are poverty-stricken.

…this is America’s opportunity to help bridge the gulf between the haves and the have-nots. The question is whether America will do it. There is nothing new about poverty. What is new is that we now have the techniques and the resources to get rid of poverty. The real question is whether we have the will. In a few weeks some of us are coming to Washington to see if the will is still alive or if it is alive in this nation. We are coming to Washington in a Poor People’s Campaign. . . We are coming to demand that the government address itself to the problem of poverty. . . yes, it will be a Poor People’s Campaign.

This is the question facing America. Ultimately a great nation is a compassionate nation.

America has not met its obligations and its responsibilities to the poor. One day we will have to stand before the God of history and we will talk in terms
of things we’ve done. Yes, we will be able to say we built gargantuan bridges to span the seas, we built gigantic buildings to kiss the skies. Yes, we made our submarines to penetrate oceanic depths. We brought into being many other things with our scientific and technological power. It seems that I can hear the God of history saying, “That was not enough! But I was hungry, and ye fed me not. I was naked, and ye clothed me not. I was devoid of a decent sanitary house to live in, and ye provided no shelter for me. And consequently, you cannot enter the kingdom of greatness. If ye do it unto the least of these, my brethren, ye do it unto me.” That’s the question facing America today.”

(The full text of Dr. King’s sermon entitled “Remaining Awake Through a Great Revolution” containing the above quotes can be read here:
http://tinyurl.com/82npj

Dr. King delivered it at the National Cathedral, Washington, D.C., on March 31, 1968, and you can listen to two audio excerpts of the sermon at that same
link.)

****Today, more than forty years after Dr. King gave that sermon, 41 percent of humanity still defecate in the streets because they have no access to sanitation, one-quarter of humanity is still forced to live without electricity, and 30,000 KIDS DIE UNNECESSARILY EACH DAY (See www.WhatNewsShouldBe.org for the proof, along with an article about the statistical accuracy of such numbers). If you are indeed up for King’s challenge, you’ll need to seek out that world perspective he spoke about and get the real front page news on your own, because news which affects the largest number of people in the most serious ways is rarely covered in TV news shows and newspapers!! This website,www.WhatNewsShouldBe.com,is one of the places you can find it. It is only when information about the most pressing issues facing humanity is widely known that the needless death and suffering can be stopped. As this and other websites demonstrate, it doesn’t have to be this way because THERE IS ENOUGH FOR EVERYONE.

Please pass it on.